skip to main | skip to sidebar

A River Runs Through It~~The Sequel

Have you heard of the movie by this title? Well, it seemed appropriate to borrow it to describe the Fall Marburger show. Where do I begin... We arrived a day earlier than usual, which was a wise decision, because it gave us time to be less stressed putting the booth together and we got to spend more time with our peeps. I, unfortunately, succumbed to a cold on the way so that was an obstacle I didn't anticipate~~but I was able to suck it up and get the job done. We put together what I feel was our most awesome booth ever. We finished early in the day on Monday and had time to schmooze and hang out with our friends, and had dinner on the grounds with TOT, Craig, Teresa and Lauri at TOT's camper.

Suddenly, the heaven's opened up and we got the most awful storm and buckets of rain poured down. When it slacked off enough to go to the tent we all saw the worst thing you could ever see the night before a show opens.... Our booths were flooded with several inches of water. We had put down straw to make the floor look more rustic, so we had a soup of water and straw. So after three days of sweating til we had none left, fighting a cold, and feeling just dog tired we had to completely tear apart the displays in the front of the booth and move it all to the back of the booth which was drier. We drove to our motel in more rain and listened to it storm all night.

We arrived before daylight the next morning not knowing what we would find. It was a muddy mess outside and the booth was still holding water. We added another layer of straw to the soup to try and soak it up and proceeded to put the booth back together. The show opened and we had an awesome show~~my best yet~~in spite of all the chaos. Here's the booth in all it's wet glory.... 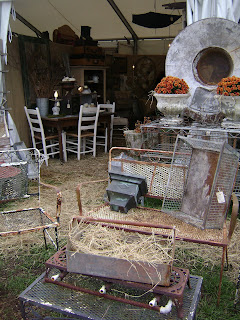 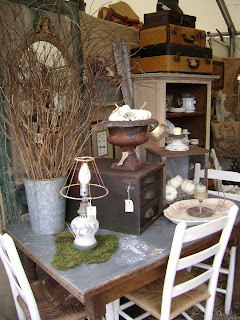 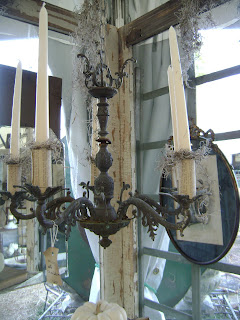 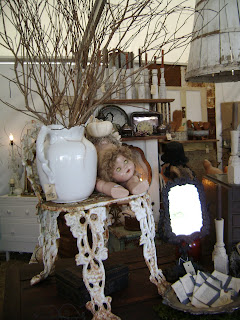 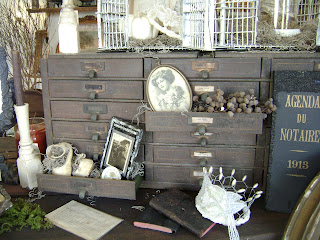 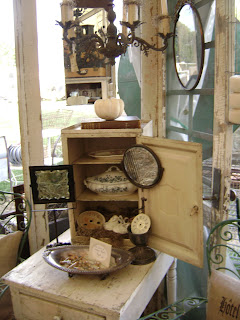 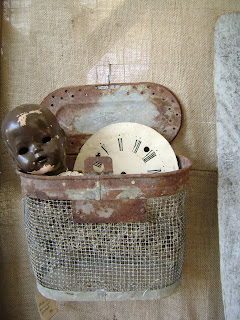 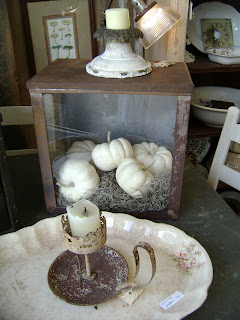 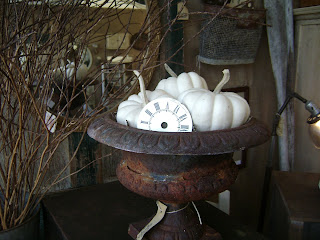 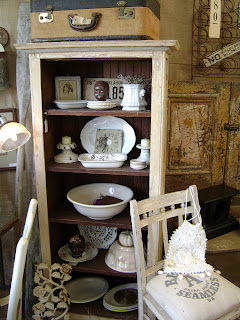 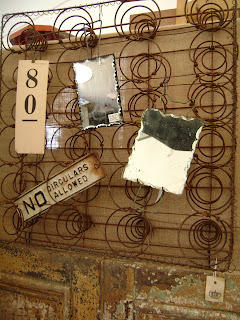 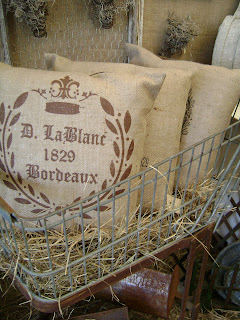 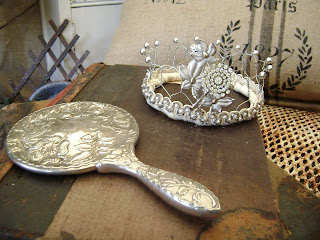 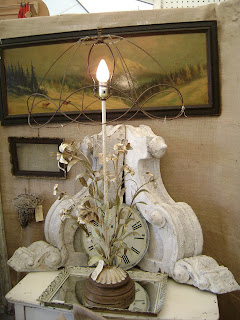 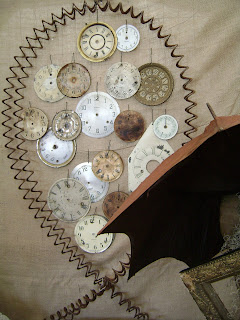 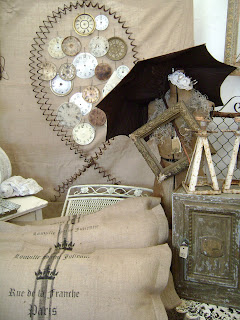 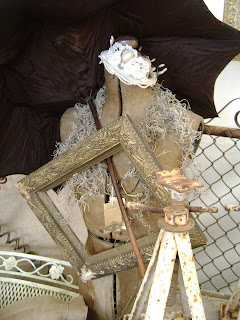 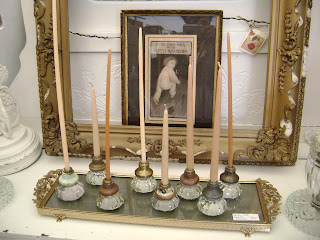 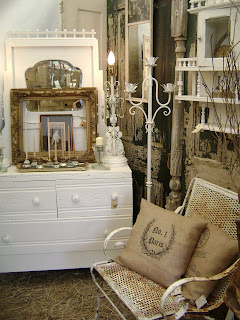 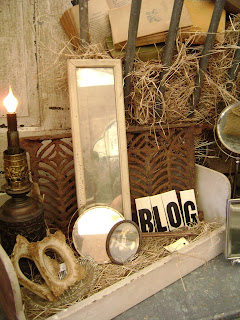 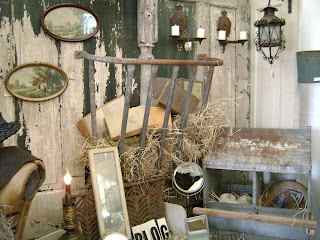 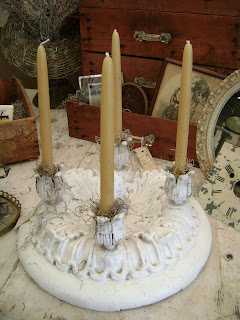 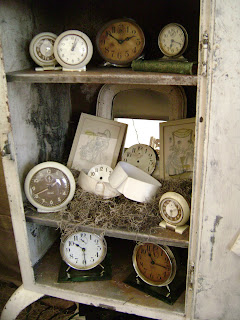 Okay so you think the drama is over right? The last day of the show~~Saturday~~our luck ran out again. It started to rain before noon and never really stopped completely. I had a good day in spite of it~~antiquers are die-hards aren't we~~and ended with a strong sales total. The show ends at 4pm and the frenzy of load out begins. At 4 pm practically on the dot, the sky opened again and we loaded out in the pouring down rain. We finished in the dark with a flashlight, soaked to the bone and filthy. I know when we shuffled into Dairy Queen (the only thing still open) they had to wonder if we even had the money to pay for our food. We were rode hard and put up wet (not joking one bit). We drove two days home in the rain, sometimes so hard we could hardly see the road. Still grateful though for a safe trip, good times, great sales, and all the new friends we made. Thanks to everyone who stopped by our booth and found a treasure~~~see you in the Spring!!

Girl, I feel for you, hope you're doing better by now, and have recovered from your cold AND the trauma of mud and muck, but the photos are fabulous, and no one would have ever guessed by those. Glad to hear it was worth all the effort. How could anyone resist all this wonderful stuff!!??
Debra

Shelly I think you are right, it was your best booth ever! I loved it! Glad you had a great show!
TOT

Glad you had a great sale...sorry bout all the rain!
I love the display of all the old door knobs with the candles. I haven't seen that before. I have one lonely knob....I like the grouping.
Hope you dried out and are feeling better!

I WOULD HAVE BOUGHT IT ALL! xo DIANA

What a fabulous booth and photos!!!!
The rain, flooding and your cold don't sound very good but it seems as if all came out well in the end. Hope you're over that cold.

oh, i see soooooooooooo many things i would love, i wish i live closer, you should open an online store!!!

I am so...glad your show was a success! Everything looks just amazing!
You have quite a gift at display and gathering of goods!
I hope you didn't get sick...and if you did...you've recovered!
Again, What a wonderful treat your photos are, Thank you so...much for sharing...dj

Girl, I know we discussed this but I do believe it was your best booth yet. Seeing your pics again confirmed it!

Sorry about the rain! Your photos are amazing...if only I could have seen it all in person! What a fabulous looking booth!
:) Laura

Thank goodness your home safe. What a tail to tell, but I still wish I was there. So glad your safe and sound Shelley, sounds like a good attitude can get one through anything. Your displays look delightful.

So wonderful for you that you had a good sale (money wise) but it is not good for me because that means more people are loving the same things I do. I LOVE what you were selling, wish I could have been there!!! Have a great weekend, it will be here soon, I hope you get to feeling better. Check out my giveaway and see if you'd like it!

OK, Shelley, I'm just dying here looking at those photos of your booth! SO, SO gorgeous! So many wonderful ideas too - you've got the gift of display for sure! I just loved meeting you when I was there - thanks so much for taking the time to come over and pick me up from the gate and introducing me to everyone else. You're a total sweetheart. I can't wait to come again, and this time not miss out on the infamous Marburger Show.

Sounds like quite an adventure! I would love to visit that huge antique show someday (when it's not pouring and when my little boys are bigger!) Your booth is fabulous! I love it all!!!
Michelle

OK...now my show sounds *easy*! But I'm so glad you survived it all and brought home such glorious pictures for us to enjoy! You are an inspiration to me...
Rene'

I agree, your booth was AMAZING. Tueday night when it stormed the first time I thought about you dealers and knew how horrifying it would be to see your creation washing away. Glad it turned out well for you. Lisa

You have so many nice displays, I love the old clocks and the candles in the old door crystal knobs. sandi

Man that was some work and heartache...good of you to be looking on the bright side and waiting to go back. Your booth was awesome! I could live in your booth and be a happy soul just sans the water. It's funny we get people who say "I would love to do what your doing" and I think to myself yeah say that on a downpouring day! LOL I'm sure you get that too!
xo...Carole

Shelley, Your booth was beautiful, so many great treasures that I would love to have. I am so happy that you did well for the show inspite of all the rain.

I was in heaven the whole time I was scrolling down! Why don't I live near any of thse sales?? Probably because it is better that i don't go and try to fit anything else in my home!!

Sorry about all the rain and your cold. Hope you are feeling better!!

Shelly the photos are fabulous. You would never know that it had 3 inches of water in it just hours before. I love everything and can't wait to see what you bring in the Spring. Love, Lauri

sweetpea
Antique dealer, junk lover, one of the "green" people before we even knew we were. Wife, mother of two sons, grandma to three little angels. Twice a year Mr. Sweet Pea and I make the long drive to Texas to do the Marburger Farms show. We love it and wish we lived closer. But then there are those three little angels... Never tire of looking for treasure and re-doing my home. 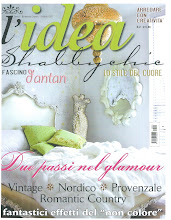 MY HOME IS FEATURED

JANUARY 2011 COTTAGE OF THE MONTH 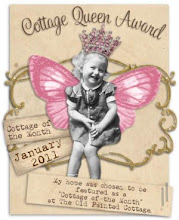 Our Home Is Featured 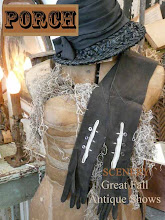 Pinch Me... I'm on the cover of PORCH

PLEASE DON'T USE COPY/PICS WITHOUT PERMISSION

WHAT DO I COLLECT?

Visits from my friends

All photos on this blog are the property of Sweet Pea Home and may not be used without prior permission.

I changed my font at scrappinblogs.blogspot.com